What is the difference between a TV and a commercial screen?

What is the difference between between a domestic television and a commercial display screen?

There are two main options to be looking at: the consumer television and the commercial display screen.

The most obvious difference is the presence (or lack of) a TV tuner. A Television features a built-in tuner, whereas a commercial display screen doesn’t.

Also, it will be difficult to find a domestic functionality such as Smart TV in a commerical screen.

Comparative costs of the same size TV and commercial screen being typically 50%, even 100% higher in a commercial display.

The reason for this is down to quality of build and the expected operating hours of each option.
The average number of viewing hours of a television is approximately 4 hours per day, whereas a commercial screen is expected (and designed and built) to be running for 12 or 24 hours a day, every day of the week. Therefore, the quality of components and quality of build of a commercial screen needs to be significantly greater than a domestic TV.

What to consider when choosing a TV or commerical display

‘Screen burn’ is a really important consideration in digital signage applications. Digital signage is likely to display the same or very similar images on screen 24-7 which, if displayed on a domestic television, would very quickly result in a screen-burn effect – a permanent discolouration of screen pixels which appears as a ghost image. 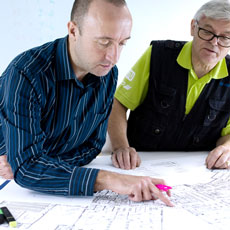 Our AV experts offer a wide range of added-value services above and beyond the expectations of many other distributors including; System Design, Product Specification, Wiring Diagrams, Rack Design & Build, System Configuration, Training and Onsite/Remote System Support.

Our customers can access any or all of these services - many of which are totally free-of-charge - on a project by project basis; benefitting from increased skill levels, specialists in new technologies & integration or simply to increase your resource for pre- and -post sales support.

HowToAV.tv provides a whole host of tips, tricks and technology know-how for the professional and residential AV sectors.
Subscribe to our YouTube channel now at howtoav.tv for all the latest video casts or send us your questions to findout@howtoav.tv